Thank you to Milly After 47 years 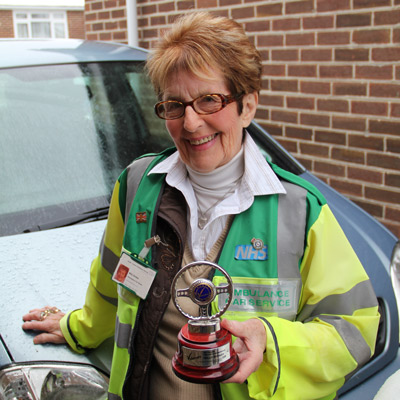 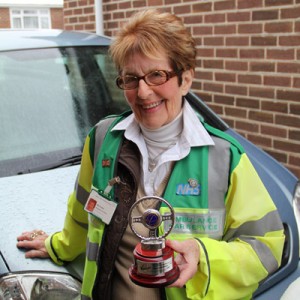 Milly began driving as a volunteer back in 1968 for the ambulance car service in Hampshire and has received three long service awards including one from SCAS as well as one from University Hospital Southampton NHS Foundation Trust.

Milly said: “In my first 10 years, I used to take three chaps from Netley village to Knowle Hospital. Getting them there at 9.30am and transporting them back to Netley for 3.30pm meant I could do my driving and still be there to collect my children from school.”

Over the years, Milly has driven patients to and from places as far from Hampshire as Liverpool, Plymouth, Norfolk and Birmingham as well as got to know lots of ‘regulars’ – patients who she has transported frequently as they attend hospital or treatment centres for dialysis, chemotherapy and radiotherapy.

“I’ll miss meeting all the patients and having so many different and interesting people to talk to. Also, I’ve loved seeing new towns, villages and countryside when I’m out driving so I’ll miss that too” Milly Stokes.

“It’s hard to believe that in the year Milly started volunteering, Harold Wilson was Prime Minister, Dad’s Army first appeared on TV and British Rail’s last steam train service between Liverpool and Carlisle made its final journey. A lot may have changed since then but one thing has remained constant; Milly’s dedication, enthusiasm and commitment to her patients. She has been an inspiration to many for her fantastic service and we will be very sad to see her go.”

And whilst Milly may have ‘hung up her keys’ for the last time, she has no plans to put her feet up completely.

“I’ll still keep up my volunteering – I won’t be sitting around on my bottom! I already volunteer at my local hospital so I’ll still do that…and maybe help out at a charity shop too.”